Editor’s Note: Surprise, surprise. After a long hiatus, Geaux Therefore is back – just in
time for the Super Bowl!

In the days leading up to the Super Bowl in the Mercedes-Benz Super Dome Feb. 3, New Orleans may be the world’s largest construction zone. Construction is nothing new for the Crescent City. This place has been under construction constantly since Hurricane Katrina left her battered and wounded, down but not out.

Aided by the massive reshaping and rebuilding, the city came back with passion and spice. And when New Orleans was announced as the host city for the 2013 Super Bowl, NOLA ordered up yet another round of updates and improvements. The Super Bowl is a chance for the city shine and I believe she will look good for her close-up.

For over a year the touristy sections of town have been reduced to a maze of traffic cones, barriers and orange construction netting. Street and sidewalk work in the French Quarter, a new streetcar line on Loyola Avenue, and a $300 million airport makeover. And the work continues. On Jan. 23, Mayor Mitch Landrieu declared the city Super Bowl ready. Mission accomplished … almost. I suspect the work will continue right up until people begin to arrive for the big game. Maybe we should change the welcome signs to read, “Welcome to New Orleans: Careful, The Paint is Still Wet.”

This Super Bowl is important for our city. We’ve survived Katrina, the BP oil spill, a cantankerous little storm named Isaac and the corruption trials of countless civil “servants.” The game brings an influx of cash. It means major exposure. People will visit and want to come back. You just can’t help falling in love with New Orleans.

New Orleans has already hosted nine Super Bowls. But this tenth one, though very important, isn’t our most important Super Bowl. That came in 2010. We didn’t host it, but the Saints won it. Rarely has sport been so transcendent. The win was so much more that a reason to brag about a game. Players and coaches alike wanted to win it for the city. They wanted to make a statement. The win said our city was back from the brink. It gave a measure of hope just when we needed it.

I will always treasure my memories of the victory parade that follow that Super Bowl win. We saw Drew, Reggie, Pierre, Sean and the team. That was cool. But the best part was sharing the night with 800,000 other Saints fans – people of all walks of life.  We shared something special together as a city and a region. We experienced community. My love for the city and its people grew that evening.

But a championship can only do so much. It provided some hope, but it didn’t solve all our problems. Our educational system is improving, but it is what it should be. We still have a ridiculous murder rate holding us back. Still we have a lot going for us – food, history, music, art, architecture, passion, etc. All this good needs to be matched with good schools, safe streets and opportunity – in a word, hope – real and lasting hope.

It is game time, but the paint is still wet. Solutions to our problems still can be found. The solution rests with you and me – everyday New Orleanians. It won’t be easy … in fact it often seems like fourth and long. It’s game time. Will you get in the game?

Until 2010, http://www.cityofno.com was the official web address for the New Orleans city government. Mayor Mitch Landrieu quickly changed the web address to http://www.nola.gov soon after he was elected to office. He referenced this fact in his recent State of the City speech.

END_OF_DOCUMENT_TOKEN_TO_BE_REPLACED

Editor’s note: All the King Cake is gone and Geaux Therefore is back from the Mardi Gras break. This post on context was published in the early days of the Geaux Therefore blog. In those days, virtual no one was reading the blog, so I thought it might be time to take a second look at “where, when and why.” It isn’t a straight repeat, rather a second, updated look at context. I hope you enjoy.

Where, when and why. These are three of the most important concepts for the missional adventurer. Knowing, mastering and wrestling with each of these concepts is a life-long process.

Know where you are
By nature a photograph captures only a portion of the real scene. The photograph is stingy with space – capturing things as they really are within certain parameters. At times, the deepest communication in a photograph comes not from what is included, but from that which is missing. The photograph has captured truth – at least the portion visible in the viewfinder at a specific moment in time.

END_OF_DOCUMENT_TOKEN_TO_BE_REPLACED 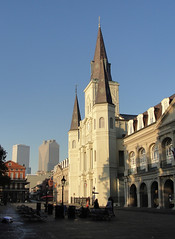